Cooperation across the Commonwealth with Lord Boateng and Special Guests 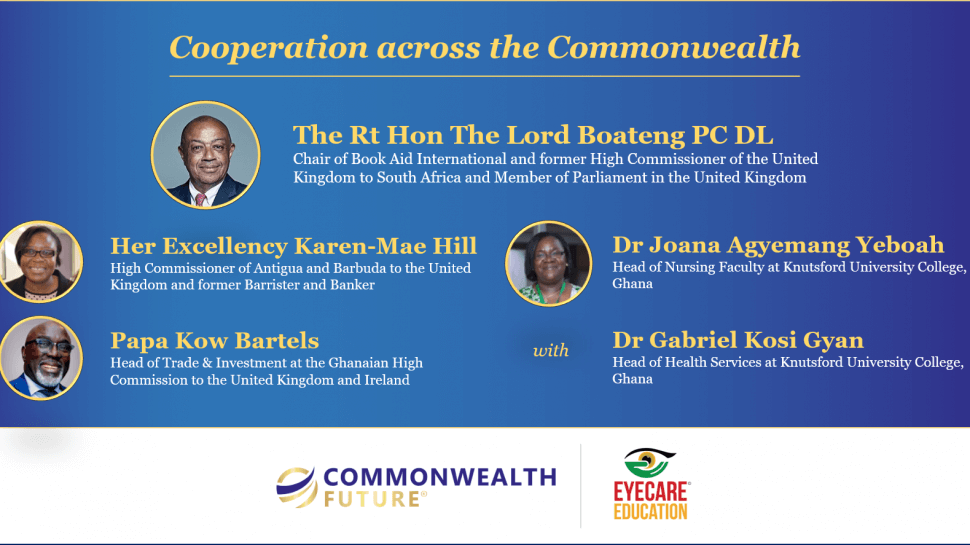 Join The Rt Hon The Lord Boateng PC DL, Her Excellency Karen-Mae Hill, Papa Kow Bartels and special guests in conversation on theme of ‘Cooperation across the Commonwealth’. The event builds on the role of active engagement and involvement across the peoples and member states of the Commonwealth.

The Rt Hon The Lord Boateng PC DL will talk on “Beyond The Pandemic – Challenges and Opportunities for Sustainable Health Care and Sanitation in a Changed World”. The session will then feature the international experiences of distinguished guests of cooperation across the Commonwealth in harnessing the collective power of peoples and nation states towards positive action.

Commonwealth Future wishes to thank Ms Gina Asare, Director of International Strategic Partnerships for her support with the Ghanaian Delegation .

The webinar builds upon Commonwealth Future’s 2020 strategy to support countries across the Commonwealth with access to pioneering knowledge sharing and thought leadership in eyecare education and awareness. Without access to these solutions and services, many individuals will struggle to improve their own character and evolve to fulfil their own potential.

This unique event is part of a series of discussions promoting the importance of eyecare education through reading. Commonwealth Future believes that a focus on optimising sight is essential in order to create a fair and equitable society.

The Rt Hon The Lord Boateng PC DL, Member of the House of Lords in the United Kingdom, is the former High Commissioner of the United Kingdom to South Africa. A previous Labour Member of Parliament, Lord Boateng has had a pioneering career including becoming the first black Cabinet Minister and the first black ambassador in British history. He was previously Chief Secretary to the Treasury and the UK’s first Minister for Young People. Today Lord Boateng is the chairman of Book Aid International and Vice-President of The London Library.

Her Excellency Karen-Mae Hill is the High Commissioner of Antigua and Barbuda to the United Kingdom and was appointed in November 2015. Her Excellency has led a distinguished career as a former barrister and banker and is a passionate advocate for the work of youth, education, trade and investment and climate change. Her Excellency has a deep interest in the role and relevance of the Commonwealth in uniting peoples around its diverse constituents.

Papa Kow Bartels is Head of Trade & Investment at the Ghanaian High Commission to the United Kingdom and the Republic of Ireland.