Visualising a Characterful Society with Sir Anthony Seldon and Guests 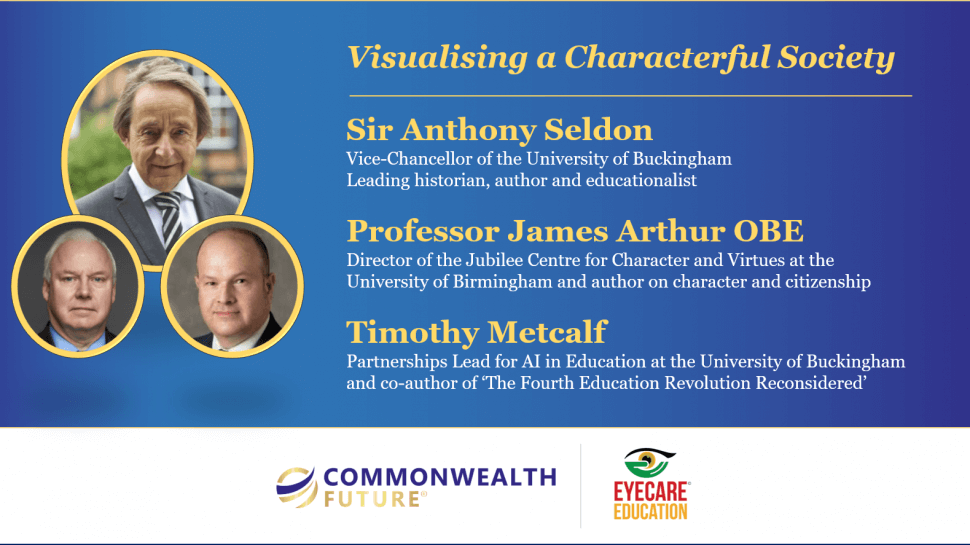 Commonwealth Future – a non-party political organisation that promotes cohesion throughout the 54 Commonwealth countries – hosted another engaging webinar on Thursday 17 September.

The Visualising a Characterful Society webinar forms a series that aims to promote greater awareness of vision health to fellow countries.  Commonwealth Future’s 2020 strategy is to support countries across the Commonwealth with access to pioneering knowledge sharing and thought leadership in eyecare education and awareness. Without access to these solutions and services, many individuals will struggle to improve their own character and evolve to fulfil their own potential.

The webinar explored how education of certain values plays a pivotal role in creating a fair, just and equitable society.   Sharing their vision, learnings and insight was an impressive cohort of experts and authors that included Sir Anthony Seldon, Professor James Arthur OBE and Timothy Metcalf.

The theme for the webinar was inspired by the release of a new educational book: ‘Educating for a Characterful Society’ by authors including Sir Anthony Seldon, Professor James Arthur OBE, Baroness Nicky Morgan, Dame Julia Cleverdon CBE, Lord James O’Shaughnessy and Adam Seldon.

The UK National Curriculum states that schools should reaffirm commitment to the virtues of truth, justice, honesty, trust and a sense of duty. This aim, loosely defined as ‘character’ education, is widely agreed to be critical to healthy development and a fair, just and democratic society. “Educating for a Characterful Society” available through Google Books looks at what ‘character’ is and how best to educate for it. The book looks at questions of research, education, government policy and societal engagement with character and how developing the energy and passion of young people will assist with working towards a better, stronger, fairer society.

During the webinar, guest speakers discussed their views on this topical, new emerging thinking. Sir Anthony Seldon, a distinguished educationalist and author who is the Vice-Chancellor of the University of Buckingham and a former Head of Wellington and Brighton College, spoke about the important role of character. In an engaging speech, Sir Anthony asked attendees of the webinar to reflect on their own interpretations of character and its development. Sir Anthony then reflected on his experiences over 30 years of education in defining character and defined ten lessons in educating for character.

Looking to the future, Mr Metcalf highlighted the positive benefits of technology including promoting social mobility, improving teaching time, preparing for the world and encouraging lifelong learning. The book is now available on Amazon and other good book stores.

Mr Graham Robertson, International Representative of Commonwealth Future, who summarised the discussions from all speakers and invited further collaboration in utilising education and technology within the Commonwealth, then concluded the event.

Zimar Sivardeen, Chairman of Commonwealth Future commented: “It was an honour to welcome experts in their field to discuss this new, emerging trend to educate our younger generation on the importance of good values.”

“We all know good values contributes to good character and it was an interesting debate to see how education can play its part, instilling these values outside the family home.“

“In my role as Chairman and an eye care specialist, quality eye care health and vision is the golden thread running through the webinars we are currently hosting.  Being able to see enables us to read, learn, evolve and lead a better, more fulfilling life. There are synergies between investing in our health as well as investing in younger generations’ characters to benefit the societies we contribute to.”

Zimar Sivardeen set the scene at the beginning of the event:  how an estimated 900 million people in the Commonwealth have issues with visual impairment. He concluded: “Optimising sight is essential in order to create a fair and equitable society.”