In Conversation with The Rt Hon. the Lord Naseby PC – Memoirs of Sri Lanka 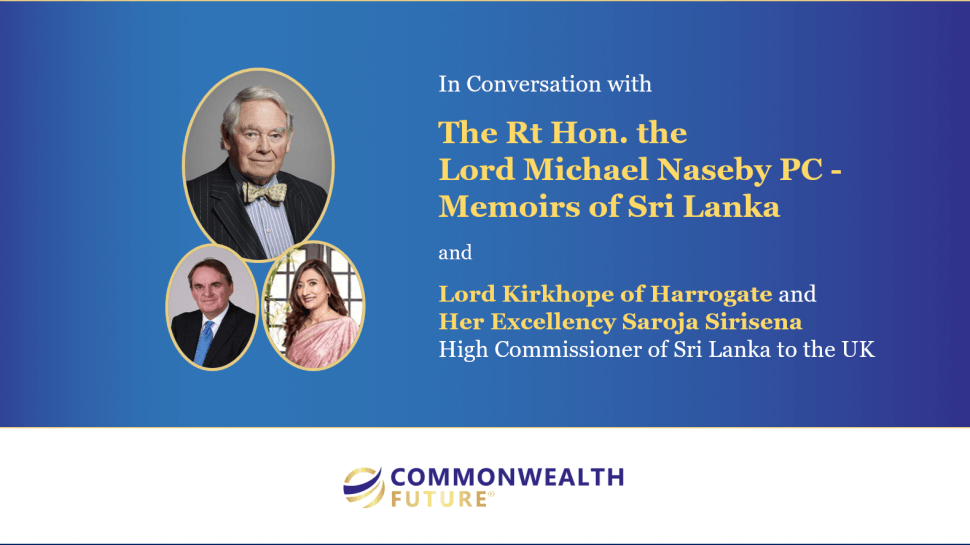 In late June, Commonwealth Future held a global webinar in celebration of The Rt Hon. the Lord Naseby PC and his memoirs of Sri Lanka. Lord Naseby, one of the UK’s leading parliamentarians, spoke of his special relationship with Sri Lanka and his more than fifty years of involvement with the country.

The event recognised the important contributions of Lord Naseby within one of the founding members of the Commonwealth. During the virtual meeting, Lord Naseby was joined by Her Excellency Saroja Sirisena, High Commissioner of Sri Lanka to the United Kingdom, and Lord Kirkhope of Harrogate. Dr. Zimar Sivardeen, Chairman of Commonwealth Future, chaired the event.

Lord Naseby was introduced by Her Excellency who commented on Sri Lanka’s continued involvement with the Commonwealth and recent successes in developing healthcare solutions across the country. Lord Kirkhope, a close friend of Lord Naseby, then joined Her Excellency by commenting on his own long-standing friendship with Lord Naseby and shared passions including piloting, as well as the peer’s deep involvement around the world.

Dr Sivardeen then joined Lord Naseby and Her Excellency in a wide-ranging fascinating question and answer session. Lord Naseby spoke of his political involvement across multiple countries, work with a wide range of leaders and even receiving an elephant as a gift on one occasion.

The special event was the first in a series of discussions with thought leaders and influencers from across the Commonwealth. In attendance at the webinar were representatives from five continents spanning the Caribbean through to Africa and Asia including distinguished leaders from fields including international relations, healthcare and education amongst others.